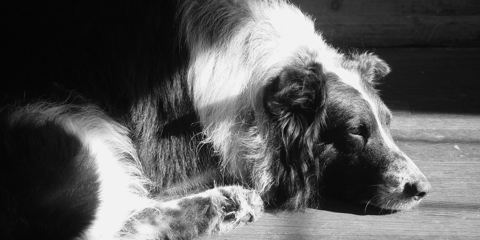 Dogs go along with apple pie, the flag, and mother.  They are there, and we accept them without question. Everyone has a dog at one time or another.  I am no exception.  However, there are dogs, and there are dogs. Some come and go in and out of our lives without a ripple, but some leave an indelible impression entering out thoughts with certain regularity.  Our dog Pete was such a dog.  He was a dog for all seasons.  No other dog, before or after, ever came close.

It was in the early 40s.  Our neighbors were moving.  They wanted us to take him.  After some discussion, Pete came to our house to live.  He was half Collie and half Shepherd.  He looked just like Lassie without the needle nose and too close eyes.

Mommy grew up in a hotel and was not a dog person.  She didn’t dislike him; she just didn’t need him.  To her, dogs were just big, friendly creatures that needed to be fed.  Daddy had a Collie named Scott when he was growing up.  I think this had a great deal to do with Pete’s actually coming to live at our house.

Pete was still a puppy, though he looked full-grown.  He was huge — all paws and very clumsy, getting into all kinds of mischief.  He never met a flower he didn’t love — a lot.  He was never trained, certainly never house broken.  Actually, he never came inside our house.  (I feel quite sure that was Mommy’s choice.)

We lived in Placerville, California, in the foothills of the Sierra Nevada Mountains, near Lake Tahoe. The windier nights could be quite cold.  So Pete slept in our basement near the wood furnace.  He could open the screen door to go in with his nose, even though it opened out — pretty impressive, but not at the genius level.  That and running around with a piece of an old towel or a stick in his mouth for a good game of chase was pretty much his bag of tricks.

All the children in our town loved him. In fact, everyone loved him, and everyone fed him.  He loved everything but lettuce and caramels.  He was happy to share a meal with all the people in our town.  It was a great life for a dog — all you could eat, no baths, and a snug place to sleep.

Then something happened that changed all our lives, including Pete’s.  Daddy enlisted in the Navy, and against Mommy’s wishes.  He was too young for WWI and too old for WWII, but he had a burning desire to serve his country.  He went into the service in 1943, pretty late in thew war, and ended up on a supply ship that sailed for Japan on VJ Day.  Mommy ran our business, which was what was then called a dry goods store [Murray’s Stationery], specializing in paper goods — from greeting cards to book keeping ledgers, sporting goods of all kinds (particularly guns), toys (including Lionel trains, metal trucks, and fancy dolls), and lastly, but very important to my sister and me, penny candy.  Well, there was rationing, and therefore shortages of paper, toys, guns, anything made of metal — and, most importantly, candy.  So, Mommy basically ran a business with nothing to sell, but that’s a whole different story.

I remember the day Daddy left as though it were yesterday.  I came home for lunch as usual.  Daddy was leaving at noon.  Mommy and my little sister were sobbing.  I knew the importance of the occasion, but I couldn’t cry.  I felt like a terrible child for not being sad and properly upset.  I headed down the hill for school.

Our house was perched on a very steep hillside with a set of steps hand-cut into the slate and soapstone drop that led to Main Street, the only real street of any significance.  Placerville, once known as Hangtown, was just eight miles from where gold was discovered nearly a hundred years before.  Main Street meandered alongside Hangtown Creek, so that the street and the creek bisected our town into two pretty equal halves.  All the hillsides in and around the town were fairly steep and were laced with old mines.  All us children were warned about the dangers of being swallowed by an old mine shaft, never to be heard of again.

As I left that terrible day, Pete was outside, naturally, and sensed the gravity of events.  He was torn between staying or walking part way down the hill with me as he usually did.  He decided to accompany me.  I made it halfway down the hill, out of earshot, sat down on a step that Daddy had helped carve out of the hillside with all the neighbors, and promptly cried my eyes out.  With great concern, Pete cocked his head to one side, assessing the situation, and put his chin on my shoulder.  Even if he didn’t really know quite what was happening, he was the soul of sympathy.

That very night of that very day when Daddy marched off to war, and much to Mommy’s utter amazement, Pete gave up his cozy spot in the warm basement, came upstairs, and slept under her window.  There really wasn’t much threat of imminent danger or foreign intruders. any act of aggression wold have been pretty much written off by everyone in town as a mistake.

Shorty, the town drunk, was about the closest thing we could imagine as a threat.  He lived in a vacant barn at the top of our hill, and, sometime, when he had gotten his pension check and had way too much to drink, he would come crashing through the poison oak and manzanita, singing at the top of his voice.  But, still, I was the oldest, and I was worried.  Pete would bark at Shorty on those occasions, more for the fun of it, I think, than for any real protection.  Shorty had a tough time negotiating the hill in the dark, let alone the set of steps that led up to our house where he might do us some bodily harm.  It was really a miracle that he didn’t trip, fall, and roll all the way down the hill to Main Street and an ignoble death.  Mommy always said he would have bounced like ball of rubber (which was also rationed).

After Daddy finished basic training and a shakedown cruise, he came home on leave.  He hitched most of the way and arrived in the middle of the night.  After my parents settled down to bed, they heard Pete get up and go down to the basement and his toasty spot next to the furnace.

Again, as before, Daddy left in midday, and again Pete was at his post under the window that night.  How did he know?  He never did that when Daddy went on a business trip.  He stayed there at his post, under Mommy’s window every night until Daddy returned to us.

As the war went on, Pete continued his rounds, eating what and where he liked. However, he always came home every night to take up his post and stand guard.  He never failed.  He still loved his dog’s life — plenty to eat and all his friends to visit.  He never suffered another bath in his life after the first one that had sent him under the house until he sensed that the water was safely turned off, and it was all right to come out.  Yes, truly he loved his life.

Mommy was very touched at his devotion to her.  Before Daddy left, about all Pete did with Mommy was to climb up the hill in front of our house when she hung out the washing.  He loved jumping at the wet sheets billowing in the breeze, leaving his paw prints o them and getting himself tangled in between Mommy’s legs.  He also came running when she fed him.  After Daddy left, each evening Pete would race down the hill to meet her on her way home from our store.  Walking up the steps was heard enough without a big dog jumping up, front paws on her shoulders, nearly sending her flying back down the hill!

As time went on, Pete’s wartime duty grew legendary.  He was a dog among dogs.  His roaming had also become equally legendary.  Still, Pete came home each night to take up his post.  As he became the local hero, we saw less and less of him.  After Daddy came home, Pete gave up his post under Mommy’s window and was gone for days, even weeks at a time.  Everyone looked for him and looked out for him.  My parents were afraid someone would dognap him, or he would be mistreated, or, even worse, poisoned.  Life was never quite the same in our little town after the war.  Some people even began to lock their doors.

Finally, in desperation Daddy gave Pete to a sheep rancher.  We sobbed and sobbed.  Of course, Pete walked home, footsore and weary, just like Lassie. My sister and I wailed anew.  We all loved Pete, but we didn’t want anything terrible to happen to him.  We wanted him to say, but he would never have survived chained or penned up.  Even a fenced yard would have been too much for him.  Our parents were caught in the horns of a genuine dilemma.  His spirt was much too big for that.

Daddy made the final decision.  One day, when we were in school, the rancher came back, and this time he took Pete to his summer pastures high in the Sierras near Lake Tahoe.  When Pete got there, he looked across the meadow at a huge flock of sheep.  He leaped out of the back of the truck and took to herding the flock the way he had slept under Mommy’s window.  He never looked back. He had found his true place.

We never had another dog.